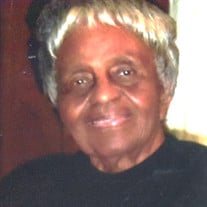 Bessie Rouis Wiley was born on December 30, 1928 in Coolidge, Georgia to the late Porter McGill and the late Rosie Lee Johnson Rouis. Bessie transitioned from her earthly home on Wednesday, March 7, 2018 at Unihealth Post-Acute Care (UPAC) of Moultrie. Bessie was a faithful member of Mother Easter Baptist Church where she was a servant on the usher ministry board, missionary society, and Sunday School #2. Bessie was a servant in the community as well where she was a member of the Gladiators, Neighborhood watch and NAACP. She was married to the late James Thomas Wiley, Sr. for over 64 years until his untimely death in 2000. She was preceded in by her husband; her parents; daughter, Debra Ann Wiley Roberts; son, Benjamin Wiley; brother Sylvester McGill; and aunt Annie Daniels. She leaves to cherish her memories 3 sons, Glenn Ivery (Pam) Wiley of Trenton, New Jersey, James Wiley, Jr. of Atlanta, Georgia and Tony Lamar Wiley of Moultrie, Georgia; daughter, Brenda Wiley of Adel, Georgia; step-daughter, Dorothy J. Sharp of Adel, Georgia; son-in-law, Andrew Roberts of Atlanta, Georgia; 3 sisters-in-law, Margaret Thompson of Winter Haven, Florida, Loretha Wiley of Gainesville, Florida and Ella Wiley of Lockport, New York; and a host of nieces, nephews, cousins and friends.

The family of Mrs. Bessie Rouis Wiley created this Life Tributes page to make it easy to share your memories.

Send flowers to the Wiley family.