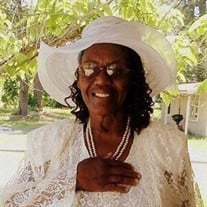 Mrs. Earline Owens Davis was born on January 25, 1942 in Mitchell County, Georgia to the later Tommy Lee Owens and the late Wylene Knighton. Earline transitioned from her earthly home on Friday, September 21, 2018 at her residence in Albany,... View Obituary & Service Information

The family of Mrs. Earline Davis created this Life Tributes page to make it easy to share your memories.

Send flowers to the Davis family.