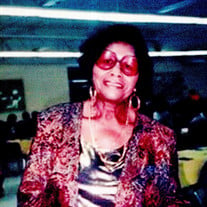 Ms. Gwendolyn Danford, 95, of Moultrie, Georgia was born on March 23, 1924 to the Eurie Lee Scott and Candaisy Collins Scott. She departed this life on Tuesday, April 16, 2019 at Colquitt Regional Medical Center. Gwendolyn Scott Danford, better known by many as Mrs. Scott or Gwen, was the last surviving of eight siblings. Gwen received her early education in the Cook County School System. She earned her cosmetology degree from the Nickles Cosmetology Institute in Tallahassee, Fl. She had that “special touch” for doing hair which she loved and had a very successful career in the field for over 70 years. She produced her own formula for a hair and scape treatment, it was in demand throughout SW Georgia and beyond. One of her most cherished memories was doing Mary McLeod Bethune’s hair, of Bethune Cookman. She also worked at Riverside Rentals for over 20 years and even taught cosmetology at Moultrie Tech. She married the late Rev. Andrew Cornelius Danford and through this union three daughter were born; Gloria, Casandra and Maria. She later married the late John W. Barer which produced four sons; Andre, Roderick, Ricardo and Reginald. Gwen was a faithful member of Mother Easter Baptist Church from the time she came to reside in Moultrie. The capacities of which she was involved in were the Deaconess, Senior Missionary Society, Senior Choir, J.B. Lewis Circle and Sunday School class. She was also an Eastern Star member. She was the president of the Freedom Savings Club, the Fresco Club, the American Legion and the Gladiators. She loved helping others in the community and would visit the local nursing homes and dress the hair of the residents. She was an avid activist during the Civil Rights Movement and organized and hosted meetings. For many years she worked the polls during local, state and National Elections and was responsible for staff provision. Gwen enjoyed doing hair and being an arid fisherman. She loved her family and people in general. Gwen was preceded in death by her daughter, Cassandra Horne, Atlanta, Ga. Gwen leaves to cherish her memories; her loving children: Gloria Smokes, Brunswick, GA, Maria Green (Clarence) Albany, GA Andre Barber, Moultrie, GA, Roderick Barber, Moultrie, GA, Ricardo Barber, Minneapolis, MN, Reginald Barber (Debra), Moultrie, GA; Grandchildren; Kimbela Pierce (Greg) Atlanta, GA, Kendall Horne (Kim) Dunwoody, GA, Kenji Horne, Indiana, Allisha Holesy, Albany, GA, Adriana Barber, Moultrie, GA Malia Thomas (Garian) Belgium, Breanna Brewer, Mobile, Ala, Richard Fein, Vancouver, WA, Zipporah Barber, Moultrie, GA, Tipporah Barber, Moultrie, GA, Quentin Sailor, Rock Island, IL, Evelyn and Thomas Cannon who she considered as her children and a host of greatgrandchildren, nieces, nephews and friends who all loved her very much 

The family of Gwendolyn S. Danford created this Life Tributes page to make it easy to share your memories.

Ms. Gwendolyn Danford, 95, of Moultrie, Georgia was born on March...

Send flowers to the Danford family.