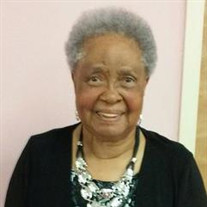 Hattie Lou Carr Holton was the first child born to Anderson Carr and Verna Mae Brown Carr on October 7, 1921 in Colquitt County Georgia. Hattie’s greatest joy came from raising her five children, who were the light of her life. Also, her joy was being a beloved, grandmother, sister, auntie, and a friend. She was a very strong woman who loved to help others and her heart never knew any limits to show love. Hattie was an excellent cook and enjoyed preparing meals for her family and friends. She loved to entertain where she hosted many family outings at her home. Also, every year on Christmas Day, she, her children and Dr. Francis Kundi and family fed and clothed people in the community. Her favorite pastime was watching the Atlanta Braves and sitting under the carport watching people as they pass by. After 16 years of service, Hattie retired from the Department of Family and Children Services as a Community Worker. Hattie had an unwavering faith in God. She was a dedicated and active member of Union Missionary Baptist Church where she was faithfully committed to Sunday school, found joy in being the President of the Senior Usher Board, and assisting with numerous church functions. She was the oldest member of the Church. Hattie was member of the Eastern Star - Queen Esther Chapter #67 and a member of a senior group called the “Gladiator.” She received many plaques for her commitment and dedicated service. Mrs. Hattie Lou Carr Holton was preceded in death by her husband, Matt Holton, parents Anderson Carr and Verna Mae Brown Carr; grandson, Dexter O. Holton; three brothers, J. C. Carr, John Henry Carr and Isareal Carr; three sisters, Mandy Mae Davis, Myrtice Reddick and Alice Pearl Jones. She will be forever remembered by her surviving children: Doris Holton, Matthew Holton, Jimmy Holton (Judy), Moultrie, GA, Carolyn Harper (Thomas), Thomasville, GA, and Gwendolyn Jeanette Mason (John), Lithonia, GA; siblings: Elbert Carr (Jewel) and Mary Francis Patterson; sister-in-law, Alma Carr; grandchildren: Audrey H. Johnson, Cynethia H. Jones, Amon Cleveland, Marcie Cleveland, Sandy Womack, and Demetrius Womack; ten great grandchildren and three great-great grandchildren. She also leaves to cherish her memories Gail C. Spicer, Anne D. Bell, Alma D. Fleming and a host of nieces, nephews, relatives, and friends. Hattie’s earthly journey is completed and she entered Heaven’s gates on Sunday, March 26, 2017. “May God be with you until we meet again.”

The family of Mrs. Hattie L. Holton created this Life Tributes page to make it easy to share your memories.

Send flowers to the Holton family.