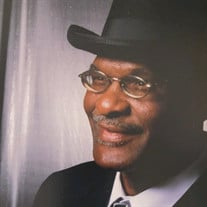 It is with heartfelt sympathy, the management and staff of Luke Strong and Son Mortuary, Ltd. are saddened to announce the passing of Mr. Johnny B. Flournoy, 75, of Warner Robins, Georgia, departed this life on Friday, April 1, 2022 at Houston... View Obituary & Service Information

The family of Mr. Johnny B. Flournoy created this Life Tributes page to make it easy to share your memories.

It is with heartfelt sympathy, the management and staff of Luke...

Send flowers to the Flournoy family.