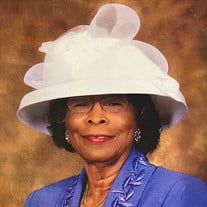 Sister Lillar C. Shepheard was a woman of character, integrity, dignity, intelligence and strength. She was a role model for many, extremely generous, and a contributor to help making the community better. To God be the Glory for the guidance He has given in bringing this lady for the halls of education in Brooks County, continuing at, the now Fort Valley State University, Florida A&M University, and Howard University. Undaunted by many challenges she was able to step higher due to the love and encouragement other parents, the late Walter and Magnolia Corker. Her concentration in education was in “Family and Consumer Science” which she taught along with Biological Science for over 36years in two counties; ending her tenure at Moultrie Senior High School. Her affinity forteaching and mentoring was not a job; it was a passion. She earned the title of “Regional Teacher of the Year” during her tenure at William Bryant High School. Sister Shepheard was also the motivator of the “Dr. Billy Graham’s Dare To Be A Daniel” Ministry which is a community project for boys ages 8-teens. She received the Educational Enrichment Community Service Award at the public meeting of the 64th South Atlantic Regional Conference of Alpha Kappa Alpha Sorority in Atlanta. She was nominated by Lambda XI Omega Chapter. There were 55,030 AKA’s registered at this meeting. She said “this was a heavenly experience which was very much endeared and cherished”. Her many church services extended to all levels of the A.M.E. Church, including the state of GA Sixth Episcopal District President of the Ministers’ Spouses and Widows Alliance (MSWA). As the former State President of MSWA, now known as SED-M-SWAWO+Pks, she organized the state organization as it is today, under Dr. Dollie Adams’ supervision. She instituted for SED-M-SWAWO+PKs the program outlay, the budget, and all insignia except the benediction. She wrote the words of the state song for the organization, which is sung at the annual conference luncheons. On the Connectional level, she was a charter member and the first assistant recording secretary of CONN-M-SWAWO+PKs. She was one of two spouses who represented Georgia as a chartered member of CONN-M-SWAWO+Pks when it was organized at the connectional level in 1989. She was involved with the Women’s Missionary Society on all levels. Also, on the state level she edited, with the help of others, two cook books entitled “Recipes from the Kitchen of the 6th”(1st and 2nd Editions). On the conference level, she dedicated her life for various services including District Consultant in Districts of the conferences where her late spouse, the Reverend Clifford E. Shepheard was the Presiding Elder. Sister Shepheard was a devoted member and Steward at Grant A.M.E. Church where she was also a member of the Evergreen McBurrows Missionary Society. Sister Shepheard was a member of the Alpha Kappa Alpha Sorority, Inc, and YMCA mentor of the month, (November2011). She was a former member of the Women’s Federated Club of Moultrie, former member of the Colquitt County Planning Commission, member of the Colquitt County and Georgia Retired Teachers Association, and member of the American Association of Retired Persons(AARP). Sister Shepheard was also a nursing home volunteer and a motivational speaker. Cherishing loving memories of her are two sons, Dr. Sharnn (Alison) Shepheard of Decatur, Georgia, and Dr. Cedric (Nadine) Shepheard of Tallahassee, Florida. Sister Shepheard spoke of her two daughters-in-law as daughters she loved as biological daughters; also cherishing loving memories are a loving and supporting sister, Walta M. Watkins of Palos Verdes, California; two special nephews, Kenton (Joan) Watkins of Palos Verdes, California, Keith Watkins of Sacramento, California. Real close and adoring relatives and friends from across the color spectrum. Several special and close friends are Verna Johnson, Margaret Hadley, the late Richie Adams, Reverend James (Charmaine) Alexander, Sr., Besfanette Whitaker; two God-sons, James(Symone) Alexander, Jr., Esq., Dr. JuDon Adams, Marie Young, Reverend Henry (Margaret)Mathis, and Mr. and Mrs. Danny Whaley.

Sister Lillar C. Shepheard was a woman of character, integrity, dignity, intelligence and strength. She was a role model for many, extremely generous, and a contributor to help making the community better. To God be the... View Obituary & Service Information

The family of Mrs. Lillar C. Shepheard created this Life Tributes page to make it easy to share your memories.

Sister Lillar C. Shepheard was a woman of character, integrity,...

Send flowers to the Shepheard family.