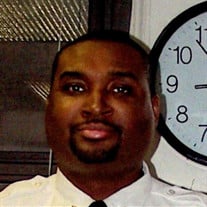 Malcolm Russell Davis unfortunately passed away on February 12, 2019, after an arduous battle with cancer. He died in his home in Washingtonville, New York. Malcolm was born May 31, 1969 in Rockville Centre, New York. Malcolm was baptized at an early age at Community Baptist Church in Jamaica, New York under Reverend Johnson. A lifelong New Yorker, he was raised in Queens, New York, and attended York College, where he received a degree in accounting. Malcolm worked for the New York State Department of Motor Vehicles for a number of years, before he began his illustrious career with the New York City Department of Corrections in April 1997. He became a Captain with the DOC in 2007. He served for 20 years before retiring in 2017. Malcolm married Kamona Davis on May 29, 2015, in a private ceremony in Las Vegas, Nevada. Malcolm had three children (one by blood, two by bond): Malcolm Corey, Xavier, and Madison. He unfortunately lost his mother, Annie Margaret Davis, in 2011. His interests included traveling, electronics and technology, and golfing. He was a cigar enthusiast and was the owner of an expansive watch collection. His interests in finance extended beyond his college education: he was an avid follower of the stock market. He had an interest in politics, as well as home improvement. Malcolm’s family and friends described him as a loveable introvert. He was honest and admirable. He was a very benevolent individual, always willing to offer a helping hand to others. Malcolm is survived by his wife and three children; his father, Robert Young; three sisters, Judith, Karen and Katrina; special aunt Alma Lee Fleming (John), and aunts Evelyn Davis Golden and Judy D. Webster (Tommie); uncles, Derrick Smith (April) and Reverend James Golden; brotherly cousins Marty Fleming (Sheila) and Marcus Fleming; sisterly cousins, Reverend Vivian Louise James(Will), Dr. Faye Golden, First Lady Tesha Wells (Reverend Marquette) and Jasmine McCoy (Christopher); nieces, nephews and many close friends.

The family of Mr. Malcolm Russell Davis created this Life Tributes page to make it easy to share your memories.

Send flowers to the Davis family.