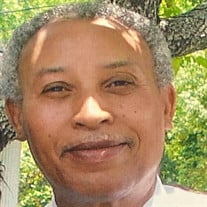 Robert Edwin Covington “Bob” quietly departed this life at home with his family on Saturday, April 9, 2022. He was born April 30, 1938 to the late William Cato Covington and Lee Ida Coston Covington. Robert was the youngest of eight siblings. He was educated in the Moultrie Public School System. Bob married his high school sweetheart, Betty Ruth Hayes and together they enjoyed over 60 years of marriage. To this union they have one son, Rev. Victor E. Covington. Bob and Betty lived and worked in Atlantic City, NJ from 1960 until he retired from the casino gaming industry in 2006. Bob enjoyed baking and was known for his infamous sweet potato pies. He was also an avid bowler, but his favorite past-time was gambling (cards, shooting pool, horse racing, and casino games). Bob accepted Christ as his Savior and was adamant about his early morning devotions with the Lord. In 2006, Bob retired and relocated to Covington, Georgia where they united with the Bethlehem Baptist Church, under the caring pastorate of Rev. Hezekiah Benton, where he thoroughly enjoyed singing with the male chorus. Bob was a man of very few words; however he was a God-sent caring husband to his wife until the Lord called her to rest in 2020. Bob was also and an awesome father. Bob was predeceased by his wife Betty, parents, and brothers: Milton, Winston, Sandy, and Randolph; sisters: Corriner Walker, Mary Jackson, and Lee Ida Caver. Bob leaves a legacy of love to cherish his memory, his one son; Victor E. Covington (Jennifer); one granddaughter, Angeline; one brother, William Covington of Detroit, MI and a host of nieces, nephews, and other relatives and friends.

Robert Edwin Covington &#8220;Bob&#8221; quietly departed this life at home with his family on Saturday, April 9, 2022. He was born April 30, 1938 to the late William Cato Covington and Lee Ida Coston Covington. Robert was the youngest of eight... View Obituary & Service Information

The family of Mr. Robert E. Covington created this Life Tributes page to make it easy to share your memories.

Send flowers to the Covington family.