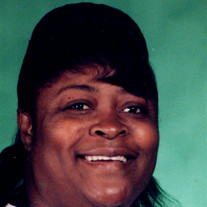 Sufonza Moore Hawkins came to this world as a twin June 20, 1960 in Hartsfield, Georgia. As a youth and throughout adulthood, she resided in Moultrie, Georgia then moved to Tallahassee, Florida. She was the daughter of the late Shem and Sarah Moore of Moultrie, Georgia. Sufonza had many aliases and was known as: “Sizz,” “Fonza,” “Fonzie,” “Sis,” and “Sissy” if she was called, she would answer to them all. She had a fun-loving and giving character that if you would meet her, her impression would stick long after she had left. She worked well with the youth and elderly and held various occupations servicing both populations. Her first occupation was a youth recreational worker for the R.D. Smith Youth Center in Moultrie where she also loved and played basketball. Sufonza graduated from Moultrie Senior High School and later attended Moultrie Vocational Technical School and became a Certified Nurse’s Assistant. She used her certification to work at a local nursing home. Her last occupation was for the Colquitt County Board of Education where she worked as a bus driver and cook. She is the mother of one son Marland D. Moore of Houston, Texas and grandmother of five grandchildren with one great-grandchild. Her youngest grandson is Me’ssiah R. S. Moore, (Me’ssiah’s mother, and her son’s companion, is Charlese Sterling). Her oldest grandson is Marland D. Moore Jr.; and granddaughters Nevaeh M. Moore, and Elaundrea R. Harry of Houston, Texas; Shakhila K. Harry and a great-granddaughter Madisyn Makari-Williams of Moultrie, Georgia mother Nichelle Moore. Sufonza has fourteen brothers and sisters James A. Moore(decease) and Lyndell Moore(decease). Her survivors are: Sarah A. Victum of Boston, Massachusetts; Lillie M. Phillips of Moultrie, Georgia; John W. Moore of Atlanta, Georgia; Emma L. and husband Andrew Stailey of Moultrie, Georgia; Fletcher W. and wife Sandra Moore of Moultrie, Georgia; Richard A. Moore of Moultrie, Georgia; Mary A. Harris, of Dayton, Ohio; Alfonza Moore, (her twin); Lista S. Moore of Rockford, Illinois; Timothy T. Moore of Rockford, Illinois, and Marshall C. Moore and wife Savonnie Moore of Moultrie, Georgia. She has one aunt Elizabeth Moore of Ellaville, Georgia and a host of cousins, nieces and nephews throughout the United States. She is loved and will be missed by all. R.I.P Sufonza until Jesus returns.

Sufonza Moore Hawkins came to this world as a twin June 20, 1960 in Hartsfield, Georgia. As a youth and throughout adulthood, she resided in Moultrie, Georgia then moved to Tallahassee, Florida. She was the daughter of the late Shem and Sarah... View Obituary & Service Information

The family of Mrs. Sufonza Moore-Hawkins created this Life Tributes page to make it easy to share your memories.

Send flowers to the Moore-Hawkins family.