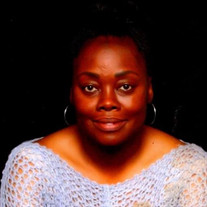 BORN: Mrs. Towanda Genell Bradford Zachery was born on July 11, 1968 in Moultrie, Georgia to the late Mr. Eddie Bradford and the late Mrs. Elizabeth Fulton Bradford. Towanda was a Correctional Officer for the Colquitt County Sheriff Department; Lieutenant for the Georgia Department of Corrections; and was employed with the Albany Transitional Center as an Assistant Superintendent. She was a faithful member of Live Oak Missionary Baptist Church where she served as a Deaconess Ministry. Towanda graduated from Colquitt County High School Class of 1986; she received her Associates of Art Degree from Darton College; Bachelor of Art from Thomas University in Criminal Justice. Through out her life she maintained a sweet and simple demeanor that won the trust and hearts of many because of her tact for mentoring. With a zest for life and always saying, “We got to leave early in the morning because I want to help them open their doors.” She had a fineness for shopping. Her favorite saying……it gets better. Her favorite store was Kirkland. She was preceded in death by her parents. She leaves to cherish her memories her husband of 16 years Charlie Will Zachery of Moultrie, Georgia; son, Darrion Bradford of Moultrie, Georgia; Takerrah Bradford of Moultrie, Georgia; three brothers, Wendell (Annmarie) Williams, Joseph (Gloria) Bradford and Greg Williams; sisters, Wanda Williams and Lizziebell Bradford; grandmother, Ruthie Lee Willis; grandchildren, Amari Haggins, Aiden Haggins, Braxtyn Bradford, Jaycob Bradford and Eliana Pope; nephews, Jaron Williams and Ryshawn Bradford; and niece, Ke’Anna Bradford; special friends, Utoria Thomas, Maxine Barge, Grace Bellamy, Debra Kemp, Terri Watts and Vanisha Brown; and a host of nieces, nephews, cousins and friends.

The family of Mrs. Towanda Genell Zachery created this Life Tributes page to make it easy to share your memories.

Send flowers to the Zachery family.