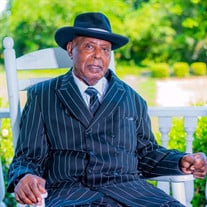 It is with heartfelt sympathy, the management and staff of Luke Strong and Son Mortuary, Ltd. are saddened to announce the passing of Deacon Willie “Billy” James Sumlin, 91, of Doerun, Georgia, transitioned from this earthly life on May 8, 2022 at his residence surrounded by his beloved wife, Mrs. Jessie Lee Sumlin. Deacon Willie “Billy” James Sumlin was born on January 13, 1931 in Sylvester (Worth County), Georgia to the late Charlie and the late Mattie Mitchell Sumlin. Deacon Sumlin was married to Ms. Jessie Lee Broner on August 12, 1950 at the Colquitt County Courthouse in Moultrie, Georgia. Their marriage has been sustained by God almighty for seventy one years. To this union, eleven children were born in which four of them has preceded them in death. He was a faithful and enthused soldier of God’s army as he was always built for battle and ready to serve. His earthly place of worship was the First African Missionary Baptist Church under the leadership of Pastor Willie Love, Jr. He served in several capacities at First African Baptist such as the Deacon Board, Choir Member, Devotion Leader, and many other capacities. Specifically, he served as a deacon for more than forty years. He was an esteemed servant of God until his health declined. In his spare time besides going to church, he loved playing checkers, watching the Atlanta Braves and Gunsmoke, and spending time with his family. During his time on Earth, he was a profound carpenter at the Marine Corps Logistics Base of Albany, Georgia. Before his career began at the marine base, he assisted in the building of the marine base. He began his career in 1950 until retirement in 1986 in which his daughter Janice begin her career at the marine base shortly before his retirement. After retiring, he continued to offer his abilities of serving his family and all those he could by ways of lawn care, carpentry, transportation, and any other acts of kindness through service under the leadership of God our Father. He was preceded in death by his parents, Mr. and Mrs. Charlie Sumlin; four children, Lucille Sumlin, Shirley Ann Sumlin, Gwendolyn Sumlin, and Kenneth Sumlin; eight brothers, Charlie Sumlin Jr., O.B. Sumlin, John Sumlin, Elijah Sumlin, Ozell Sumlin, Robert C. Sumlin, Lawrence C. Williams, and Eddie D. Sumlin; eight sisters, Annie Pearl Robinson, Fannie L. Higgins, Madine Pollard, Essie Mae Sumlin, Ethel Lee Mitchell, Alice Mae Mitchell, Annie Grace Brinson, and Doretha Coe. He leaves to cherish his beloved, dedicated wife of 71 years, Mrs. Jessie L. Sumlin of Doerun, Georgia; three sons, Charlie James Sumlin, James “Teddy” Sumlin both of Doerun, Georgia, and Tony Sumlin (Inge) of Leesburg, Georgia; daughters, Ocie B. Richardson of Doerun, Georgia, Linda (Earnest) Molden of Funston, Georgia, Janice (Walter) Brown of Dawson, Georgia, and Shelia (Willie Lambright) Sumlin of Funston, Georgia; adopted daughter, Cindy Jones of Moultrie, Georgia, special great-grandson, Tevores Sumlin of Moultrie, Georgia; special great-granddaughters, Ja'Khiya Jones and Janazha Toombs; special nephew, Wayne (Mary Alice) Daniels of Doerun, Georgia; two god daughters, Audrey Bryant of St. George, South Carolina, Willie Joyce Copeland, and Suprina (Harry) Green, both of Doerun, Georgia; one sister in law, Dorothy Ruth Daniels of Doerun, Georgia; 18 grandchildren, 46 great grandchildren, 11 great-great grandchildren; and a host of nieces, nephews, cousins, and friends.

It is with heartfelt sympathy, the management and staff of Luke Strong and Son Mortuary, Ltd. are saddened to announce the passing of Deacon Willie &#8220;Billy&#8221; James Sumlin, 91, of Doerun, Georgia, transitioned from this earthly life... View Obituary & Service Information

The family of Deacon Willie Sumlin created this Life Tributes page to make it easy to share your memories.

It is with heartfelt sympathy, the management and staff of Luke...

Send flowers to the Sumlin family.